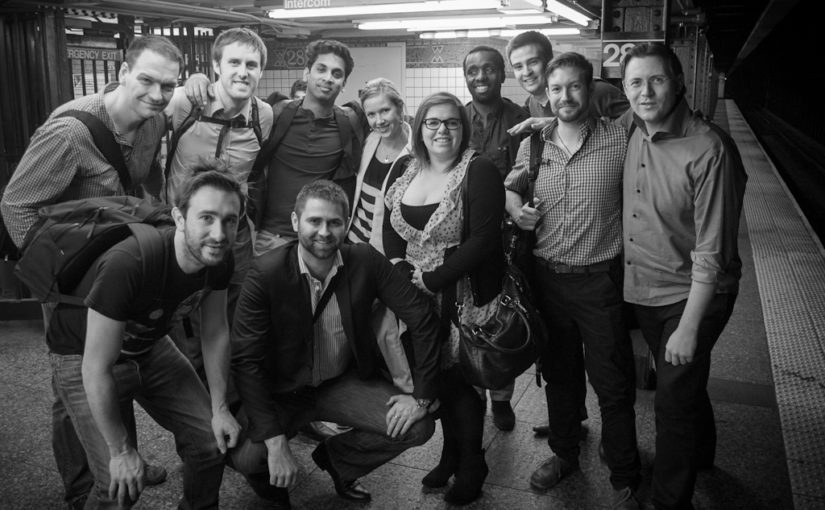 New York and London have a lot in common when it comes to finance, fashion and technology startups. The startup cultures in both cities are focussed on building real businesses not just the latest flashy social mobile apps.

Recently I’ve been in New York checking out the startup scene with VentureOut New York and UKTI. Keith Moses from UKTI and Brian Frumberg from VentureOutNY were our hosts. It was a great trip with an exciting group of startups. We had a full programme of events, meetings and visits. We kept a frenzied pace and I learnt a lot about the startup culture in New York.

The week kicked off with the VentureOutNY British Invasion Pitch Night. There was a mix of headlining five minute pitches and a round of rapid-fire one minute pitches. The panel of angel investors gave feedback on the five minute pitches. A recurring question from the investors was “What are you going to use the money for?” New York investors are (rightly) interested in what you can achieve with their money.

The Innovation Warehouse was well represented with several startups presenting to the group. The presentations were condensed to fit into the short time frame but everyone managed to talk through their product, market size, team and their company’s aspirations.

The New York Tech Meetup is the largest meetup group in the world and the event usually sells out within two minutes of tickets becoming available. The focus is on technology and they ban the question “What’s the business model?“. The technology focus allows the presenters to relax and enjoy sharing great hacks, demos and product ideas. On the night we attended, a group of high school students demoed a wrist-band using a circuit board to help blind people find food on their plates, a hacker showed us a code library that simplifies coding for Arduino Boards, Grand St showed their curated technology retail site, and Swiss Miss shared her minimalist to do list Teux Deux.

The standard of pitching was very high and the demos were all live demos so it was fun to see the companies really step up. We also saw a demo of the Power Clip which allows you to charge a cellphone from a car battery in an emergency situation and Sunrise which is a better mobile calendar application.

The event is unashamedly technology focussed but we met some great designers, product managers and UX people. Lots of the attendees were new in New York so we had lots to talk about.

Chris from AppLaunch invited us to the New York TechDrinkup which was also the official party for the New York Lean UX Conference. It was great to hear about the buzz from the conference. Lean Startup and Agile are beginning to be more and more important to modern user interface and user experience (UX) design. The topic of how to apply branding to startups seems to be coming up more and more, so the idea of Lean Branding is starting to take off. Using Lean Thinking in the startup world are very important to me and I’m excited to see this taking off in New York.

New York is like London in that there are amazing events going on every night. Geeks and Designers was at General Assembly and we managed to get last minute tickets. This event was dear to our heart because we believe so strongy in bringing together people from design and technology (and business). Geeks and Designers hosts events in San Franciso, New York and Los Angeles. The team from Grand St gave a great talk about the convergence between fashion and technology. Watch out for technology companies acting more and more like fashion companies.

The Ladders is a success story from the New York startup scene. The CEO, Alexandre Douzet gave us some great insights into doing business across New York and London. He talked about his experience with expanding The Ladders into the UK market and the ways that The Ladders has expanded their offering over the years. The team are obsessive about metrics and have dashboards on screens throughout the office.

We had rapid fire sessions with the team leaders from marketing, product management, development and even the culture team. The discussion on how Agile and Lean fit together was particularly interesting. The team talked about how they prioritise and measure their development resources. The most important point was to: “Separate problem statements from solutions and to leave the solutions to the people closest to the problem.” This means that management sets the overall direction but the design and development teams drive and iterate the user experience.

One of the big challenges for a successful startup in New York is to attract developers. One of the engineering leads told us that “There is no recession in developers.” We learnt about the importance of the office kitchen to the company. Klaus Bravenboer observed that “You can learn a lot about the culture of a business from their kitchen.” The kitchen and general office perks seemed to be a real selling point for attracting software development talent.

Skaled helps startups with business development and the team had some great advice for us about how to build a sales team in the USA. Skaled works with startups and technology businesses. Jake Dunlap believes that “Startups don’t need consultants as much as they need real help to actually get things done.” He often finds that startups aren’t disciplined enough about building a sales system to support the sales process.

Jake taught us about how to separate customer needs analysis from selling and how to build “talk tracks” which are sales messages with more flexibility and questioning built in. In New York the customers you are selling to are so overwhelmed with sales messages that you really need to sell in a better way. He recommends selling using thought leadership by being aware of industry trends and being more of an advisor to your prospects rather than just a salesperson. Today’s New York based buyer wants eduction, leadership and advice about the general category.

Janine Just specialises in public relations for startups based in New York so she had lots of great advice for the group. She mentioned Help A Reporter Out as a DIY way of doing some early PR and getting to know the USA technology media. She also mentioned PR tools that are useful in the USA like Vocus and Cision. It seems that in the USA the PR industry is more driven by press releases than the UK, where personal “sell-in” of a story through media relations dominates. Janine had some good tips on how to make your own startup story part of a larger industry trend such as New York Vs. Silicon Valley.

Janine talked about how to get featured in technology blogs and which events to attend in New York to get to know the scene. Jeanine shared a secret that for a first expansion into the USA, a Business Development person was probably more important first step than PR. The fact is that you need to have someone on the ground to convert the traffic into sales.

Alley NYC is a fantastic co-working space in New York. Alley NYC are very community focussed. Their community values include “No Assholes” and “Be Awesome”.

WeWork is a network of co-working spaces in New York. The TriBeca venue has a mix of offices and open space and the Soho WeWork location makes a mean flat white. WeWork have a very professional space and the member companies seem very focussed on fast growth.

Entrepenuers Roundtable Accelerator (also known as ERA, ER Accelerator and/or eSpace) is an accelerator with co-working space for the members. [ERA, if you’re reading this, please call me for some advice on consistently naming your brand so that you don’t confuse people.] They told us that “We are only successful when the member companies are successful.”

ERA is a fund built on a number of core principles. They don’t like group mentoring, instead preferring a more personal one-on-one approach. They believe in simplicity so they do their accelerator deals using common stock, no board positions and a half-page term sheet. ERA accepts founders from around the world and several of the UK tour group were very interested in applying to the programme.

We met with the New York Economic Development Corporation team who are part of the Mayor’s Office.

They are super passionate about promoting New York as a centre of entrepenuership and showed us some of the initiatives and programmes happening in New York to support new technology businesses. They are big fans of the Made in NY initiative.

DFJ Gotham are an angel investment and venture capital firm. They met privately with each of the startups to give them advice on capital raising in the USA. They are one of the lead sponsors of VentureOutNY and Brian is their entrepreneur in residence.

We also visited some other great companies based in New York such as USA Corporate and Stephen Bradford Recruitment. There is a lot of support and services available for companies expanding into the USA.

Overall, the tour was a great success and we learnt a lot about the startup scene in New York. Several of the companies are thinking of expanding into the USA and New York now seems like a natural first base. Mimi Liu and John Aiello were also great hosts. VentureOutNY is running events to host startups from other countries that are interested in expanding into the USA. I was amazed at how much you can fit into a week if you plan well in advance and go as a group. I was also impressed at how easy it is to make new friends and new connections in New York. It’s a surprisingly welcoming place to do business.