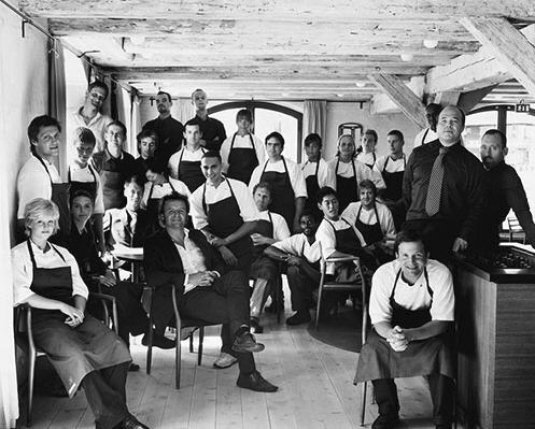 Noma is a world-famous restaurant in Copenhagen that is leading charge in creativity and innovation. The experience of eating at Noma really blew my mind. Every detail has been considered. The meal leads you on a journey throughout the Scandanavian wilderness. The idea is to use ‘found’ food that had been foraged from nature. There is a child-like wonder to the Noma restaurant that draws you into the story. The passion of the chefs is infectious and they really are on a mission to change the way that we look at creativity and food. Noma was awarded the best restaurant in the world for a couple of years running and there is a lot that we can learn from them about creativity, innovation and company culture.

We made a special trip to Copenhagen because a friend had managed to refresh the booking page on their website repeatedly until she got a table. A little like buying tickets to an almost sold-out concert. Just before leaving for Copenhagen, a client in the restaurant trade reminded me that that Autumn in Denmark might be a cold time to be foraging and that perhaps the meal would be a bit light. Luckily, the team at Noma are masters at improvising and the Autumn seasonal meal was a masterpiece.

Our night at Noma was one of those rare meals that I will remember for the rest of my life. The atmosphere of passion, dedication and creativity at Noma would have fitted in easily at NASA, Ideo, McKinsey or Droga5. Eating at Noma bought to life a few important lessons in creativity, business and how to create an immersive experience.

Each course is presented by the chefs in-person and accompanied by a small description about what the dish is and where it’s from. The storytelling is very visual and we were told about Roderick the mad scotsman who dives for seafood in Norway. One of the chefs ended up having to improvise his speech because a plate was dropped en-route to the table (if this happens the whole team return to the kitchen and regroup to arrive in unison). He spotted the error out of the corner of his eye and expertly kept us entertained with some banter about organic pine needles and a Swedish woman who unexpectedly delivered Noma a sack of Plums from the oldest Plum tree in Sweden.

Noma run a tight ship. I’d even heard of people being asked to leave because they took a phone call during the appetisers and halted the flow of the degustation menu. During the appetisers our table got a little overwhelmed. Our friend who was keeping notes lost track. I forgot what I was about to eat and there was no time to talk amongst ourselves before the next plate arrived. One of the chefs confessed afterwards that all this was intentional. It turns out that the head waiter watches the table and deliberately times the arrival of the appetisers to overwhelm you. He described it as “shock and awe” dining. The idea is to create a sense of excitement and overwhelm any rational analysis. The goal is to immerse you in the experience and get you lost in the moment.

The service from wait-staff (as opposed to chefs delivering the courses) was a uniquely Scandinavian combination of invisibility and affability. Our table included a couple of people that had already stretched their budgets to afford the flight, accommodation and the meal itself so choosing the wine was a key moment of truth. Our waiter sensed this perfectly and guided us to a couple of lovely German white wines that were clean, went with everything and were much cheaper than I expected. After the meal we invited our waiter to join us, he hesitated, but we insisted and he pulled up a chair to answer our questions about the food, the suppliers and Noma’s philosophy of creativity.

Having the chefs deliver food to the table is non-trivial. The storytelling aspect is good but it also sends all the right signals about craftsmanship and focus. There are too many professions where the thinkers and doers never meet the clients. Not at Noma.

We went on a Saturday night which turned out to be the end of the week for the Noma team. The staff party starts as soon as the last desert is plated. But this staff party is like no other. In the same way that investment bankers relax by playing liar’s poker (using statistics to gamble and show off), chefs at Noma relax by having x-factor style cook-offs. Plating amazing creations that they’ve invented over the course of that week. The team have a hashtag called #saturdaynightsproject where they tweet photos of the plating, the dishes and the chefs.

The place to be

Chefs from around the world come to Noma to volunteer and/or work for free just to be allowed to spend time in the creative space and be around the energy that Noma attracts. The combination of small (and on display) preparation kitchen with the massive test kitchen and the laboratory just outside make for a campus like feeling. The Noma Campus is a hive of activity. The Nordic Food Lab is a non-profit research project that is related to Noma but does more exploratory research rather than menu design.

The abandoned shipping warehouse has been brought to life with Bauhaus minimalism and a humanistic Scandinavian edge. Touring the R&D and test kitchens was an almost spiritual experience for me. This would be one of the top 10 most creative spaces in the world. Google Campus, Facebook HQ and Silicon Valley have nothing on Noma. The purity of design reminded me of the minimalist offices of BRR where I cut my teeth as a brand strategist. Architecture matters.

Time to be creative

Every chef at Noma is working on creative side projects. These are actively encouraged and they feed into the larger menu creation process. The test kitchen is open for chefs to use almost 24 hours a day so many of them are there working on their personal creations at all hours.

The creative freedom at Noma is a lot like Google’s famous “Twenty Percent” time. Which allows employees to work on creative side-projects for one day a week. Gmail and Google News are examples of random side projects that blossomed into full blown products.

When we visited Noma the mood boards were up for the next season. The senior team sets a direction and puts out challenges to the rest of the crew. One of the notes we saw read “ideas for straw”. Who knows what the concept of edible straw will lead to, but the overall direction allows plenty of room for individual creativity. The night that we visited Rene had injured himself and wasn’t in. The whole operation continued on seamlessly because everyone understands the vision.

Noma also organises an annual conference called MAD Food. It’s a global conference and the creativity on show is impressive. The conference helps position Noma amongst its peers. The value of thought leadership is often in attracting top talent and positioning the brand with discerning customers. Your average diner might never have heard of the MAD conference but critics, chefs and industry influencers will have.

The live shrimp at Noma aren’t the most flavoursome dish on the menu but they generate more buzz, tweets, photos and stories than all the others combined. The radish flower pot with edible soil is likewise not an amazingly tasty dish at the time but the story is vivid and memorable. It’s often the small flourishes that create the hook for a compelling story that people will tell and re-tell. The seemingly impromptu kitchen tour and the printed menu (as a gift as you are leaving) are all crafted to be memorable and shareable.

If you ever get the chance to visit Noma then jump at it. You can find lessons on creativity and innovation in the most unexpected places. Wherever I see a group of people who are passionate about something, I ask myself how they found each other and where they are going. The more unrelated a profession is to your own, the more it has to teach you.

One thought on “Creativity lessons from Noma Restaurant”