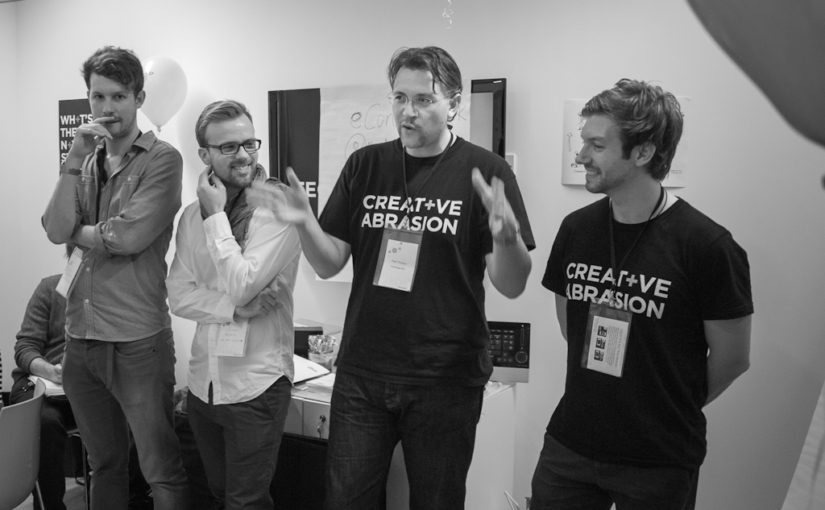 Creativity in business matters more than ever before. Luckily, there is a new technique called gamestorming that uses games to encourage creativity in business. The old approaches like workshops, brainstorms, off-sites or hiring a consultant to think for you are no longer enough to create the new ideas that you need. Execution is still vital to bring products to market, but if you don’t have a good idea to start with, then you’re stuffed.

I recently gave a presentation on Gamestorming to a group that are advocating for mobile working, digital nomads and creativity called Anywhere Working. The group is facilitated by the team at 33 Digital and David Clare was kind enough to invite me to get involved. I was presenting on behalf of one of the collectives that I’m involved in called Converge+UK. Converge+UK is all about creativity at the intersection of design, business and technology so it was great to share some ideas with the Anywhere Working crew. Rueben Milne had a great take on the ways that creativity can happen in unexpected places and at unexpected times.

Brainstorming was invented in a particular context that does not exist in every business. The earliest brainstorms were held at advertising agency BBDO in the 1940s to encourage creative teams who normally only worked on one account to get involved across the whole agency. Brainstorming was popularised by the design firm Ideo in the 1990s. Like BBDO, Ideo has an agency filled with people who specialise in creativity for a living.

Brainstorming isn’t perfect. In fact, brainstorming breaks down in most businesses. If you have a mixed team that doesn’t simply generate ideas for a living then brainstorming can be futile and even counter-productive. Brainstorming adds some rules to smooth the flow of idea generation but it can’t suddenly turn a hierarchical culture into a creative one. There are a couple of particularly problematic limitations to brainstorming:

Several creativity consultants (including Ideo) have been experimenting with new techniques for creativity. The 2010 book Gamestorming by Dave Gray, Sunni Brown and James Macanufo codified the “play” approach to creativity into a set of underlying techniques (meta-rules) and individual games that can be used to attack different creativity problems. So, what are the elements of a game?

When we watch children play it isn’t long before they’ve invented a way to compete (even if only good naturedly). Somehow, competition is at the heart of playfulness. But our adult world doesn’t cope well with the good-natured, friendly competition that creates play. We are trained into either kill-the-other-guy competition or wimpy everyone-agrees co-operation. The task of rediscovering adult playfulness is about how we can rediscover competition, play and fun.

Another thing that makes a game exist is the boundaries that define the game itself and the players in the game. The boundaries give direction and momentum to the game. At the core, a game doesn’t exist without rules. We might not always like the rules, and it’s fun to occasionally break them. But the rules create the game. The rules for gamestorming vary depending on the chosen game. This makes gamestorming more flexible than brainstorming.

For the rules to keep the game moving you need a referee or an umpire. This person can then apply the rules in a more flexible way to create the best game. A facilitator smooths out play in gamestorming.

In brainstorming, the post-it notes and flipcharts are just nice prompts for creativity. Whereas in gamestorming, the props are used as the playing pieces. This means that they are integral to the game itself. Depending on the game, you may be moving the pieces around, trading them or even hiding them around the room.

As a starter, here are a few games to try out:

Gamestorming is an art form that takes time to learn but the basics are surprisingly simple. The crew from Microsoft, Nokia and Intel’s joint Anywhere Working initiative asked me to summarise the concept with 20 slides in 5 minutes. The format is like Petcha Kutcha where the slides advance automatically every 15 seconds.

Next time you are confronted with a last minute invite to a poorly organised brainstorm, then look for a chance to turn it into a game. The first step will be to reintroduce a healthy dose of competition, energy and fun. Gamestorming is also very well suited to bringing together different disciplines because the games have their own momentum and no-one gets left out. Gamestorming won’t replace execution of an idea but you’ll be in a much better starting position if you start with a good idea. Or lots of them.

One thought on “Gamestorming Workshop Techniques”