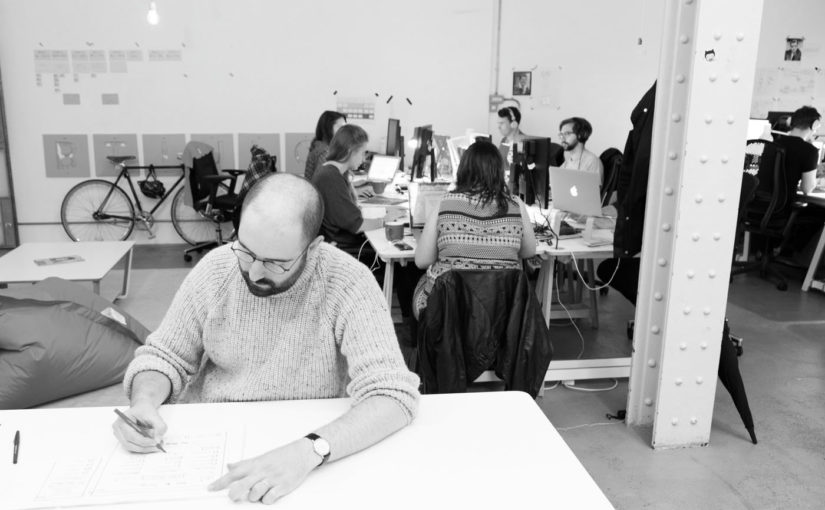 If you were the CEO of a large company, who would you turn to for help to recapture your lost mojo? How would you create, test and build new products? Big companies have been steadily getting worse at innovation, whereas startups have begun to eat the world. Small companies can move fast, take risks and attract talent.

The brightest minds of the next generation are spending their weekends writing code at hackathons and quitting their jobs to build interesting startups. The jump is easier than ever thanks to the explosion of incubators and accelerators. It’s a brave new world, but it has left large, tired old companies looking for ways to become more agile.

A new trend is emerging where hot studios (that combine design, business and technology skills) are building startups from scratch for large companies. This new approach is reviving the patronage model from Renaissance Florence.

How big companies fell behind

In the early days of advertising it was sufficient to simply convey your product’s features and benefits. In the 1960s, advertising moved into promoting a brand using emotions. The emotional style of advertising has served large companies well, but it’s now breaking down. No one is impressed any more that your advertisement can make them laugh, smile or cry. They want to play with a real experience.

To add insult to injury, it has also become harder and harder for big companies to innovate. The models proposed in the 1990s for corporate innovating (like skunkworks, intrapreneurs and absorbing mid-sized companies) were effective but only up to a point. The speed of innovation in every industry has accelerated because the tools available to startups have started to level the playing field.

These days, two software developers in a garage could revolutionise your industry in a weekend using APIs, online startup tools and cloud deployment to build an enterprise scale solution. More worryingly, the same duo could list their product on Kickstarter (or their company on an equity crowdfunding platform) and have investment within a matter of hours. This has lowered the barriers to entry in almost every industry. Startups can now create new products so fast that big companies are struggling to keep up.

Equipped with new tools that let them compete globally, startups can now leverage their real competitive advantage, their mindset. Good startups are distinguished by their speed, willingness to take risks, customer centred thinking and commitment. Big companies are starting to see startups as more and more of a credible competitive threat.

The big consulting firms and advertising agencies have offered to help their large clients innovate faster. But the agencies are so big themselves that the clients are starting to look for new advisors to help them adapt. There are several new players in this game…

There should be plenty of design thinking and innovation agencies that can provide agile innovation consulting. Their grounding in physical product design makes them excellent creative, practical and human-centred thinkers.

However, the incumbent innovation agencies like IDEO, Adaptive Path, Continuum and Frog have surprisingly entrenched economic models. They have steady billings from things like FMCG packaging design, industrial design (for tooling) and implementing standardised NPD systems. The big product design firms have grown as large as they have by making their work more repeatable and scalable.

The move to digital and social media is re-rolling the dice because some of the most successful innovation agencies have been left behind by the speed of change. Big brands may still turn to these firms for advice on how to innovate at scale but traditional product design firms no longer exclusively own the innovation conversation.

Younger service design and user interface firms (like Fjord, Engine and We Are Human) are new enough to provide useful advice to clients on innovation. But they can sometimes get pigeonholed into doing wireframes (or process improvement) and clients don’t always know which budget stream to allocate to employing them.

The new breed of Digital Product Design firms (born in the last ten years) are growing up fast. Agencies like Ustwo, Mint Digital and Made by Many can produce a prototype for an innovative new product in 2-4 days. They use the startup mindset (hackathons, lean startup and agile methods) to sprint from brainstorm to working prototype.

There are some bleeding edge firms among the digital product designers that blend both product design and startup incubation into one firm. Adaptive Lab, Sidekick Studios and Digital Telepathy provide design services as well as building their own products. But it’s hard to be a maker and a helper at the same time.

The digital product design firms are doing seriously cutting edge work, but none of them have quite achieved the global scale yet to take on the big management consultancies and advertising agencies.

Startups grow better in a supportive eco-system. Organisations like Y-combinator, Wayra, the Icehouse, Innovation Warehouse, TechStars and Seedcamp have built a thriving global support network of incubators, accelerators and co-working spaces. Big companies have tried sponsoring these organisations but the cross pollination has been accidental, infrequent and ad-hoc.

A new breed of incubators and accelerators like Collider 12, the Bakery and Mother at the Trampery are blending large brand patronage with startup incubation. These spaces provide exciting chances for brands and startups to collaborate and cross-pollinate. But even these new corporate incubators seem like an evolution of the acqui-hire model rather than a genuinely new approach to corporate innovation. The member startups may have aspirations to sell their widget to a corporate client but the knowledge transfer is limited. They’re unlikely to cause deep change back inside the mothership.

Brands are directly engaging with the startup community through sponsoring, hosting or commissioning corporate hackathons. These 2-3 day events are a furious burst of designing, building and developing. They’re called hackathons because they involve lots of coding and hacking together improvised prototypes.

A hackathon-as-a-service can include a mix of agency staff, client staff and the general startup community (incentivised to attend by the prize or the chance to make connections). Organisations like Founders Hive and One Leap help organise and facilitate hackathons (some are community-led and others have varying ranges of corporate involvement).

The output of a brand hackathon is (by definition) “hacked together” so it’s often not ready for primetime with a brand’s audience. Some brands aren’t quite ready to air their dirty laundry (or half-finished ideas) in public. There are also a host of problems with corporate hackathons to do with followup, intellectual property ownership, prize structures, remuneration, trade secrets and client expectations.

Brand hackathons are part of the future of big companies and small companies playing together. But they aren’t the full story.

A Startup Foundry is a company that creates companies. The foundries blend the best of a design firm, a startup and a venture incubator. If I wanted to show a CEO where the best innovation in the world was happening today then I’d take them on a tour to Makeshift in London, Betaworks in New York or Rocket Internet in Berlin. But I’m not sure that any of the rockstar designers and developers in these hot houses would want to spend the day playing buzz-word bingo with a corporate CEO. Many of the best startup foundries are built by former entrepreneurs, designers and developers who wanted their freedom. Their aspirations often tend more towards the building products than serving corporate clients.

The foundry model is so new that it’s still mostly untested. There are problems with the kill-chain inside well funded foundries (it’s too easy for pet projects to drift on).

Innovation agencies like Cornershop, Sandbox Industries and Forward Partners have experimented with a hybrid model where the support is wrapped around an entrepreneur-in-residence who is responsible for the startup while it’s being incubated and is able to graduate from the foundry at the same time that the company does.

By contrast, the product-only foundry model doesn’t require an entrepreneur-in-residence, but it has several problems with graduation. The conventional angel investing model doesn’t cope well with graduating a product by itself from a foundry (angels like to invest in teams not just a product). Yet, a working product (without the team) is exactly what some large corporate clients are looking for.

I’d argue that many of the startup foundries are leaving money on the table by not realising how well their objectives could align with large corporate clients. Startup foundries could build a startup and then sell it to a corporate patron rather than trying to graduate it on to angel investing and organic growth.

Corporate hackathons and sponsored incubators are the beginning of a new trend; the startup as a service. In the future, new products and services (even those offered by large companies) will be conceived, tested and funded in public. Once they are up and running, they will be handed on to the patron company to scale up.

Large brands will effectively be able to commission an end-to-end creation of a new business unit. An outsourced skunkworks would have the resources, expertise and team to create entirely new products and services.  A built-to-order company would come as a package that includes:

Integrating the startup into the client brand is a non-trival task. This is where training and consulting have to grow and evolve. The handover could be thought of more as after-sales-service rather than as just consulting because the foundry would have a vested interest in seeing the transplant be successful.

The full “startup as a service” model is new and untested. But the corporate hackathons and patronage models are already up and running. There are several interesting examples that point the way to this new style of working with large brands.

Mint Digital run hackathons for themselves and for clients. They have been using crowdfunding campaigns to test the demand for ideas that they create during their in-house hackathons. If a crowdfunding campaign is successful then the idea has bee validated by the market. Their Foldable Me prototype raised so much money on Kickstarter that Mint had already baked-in the demand for the product before they built the real thing (let alone launched it).

They have also been running hackathons-as-a-service with corporate clients. Mint Digital’s “4 Days to Launch” hackathon is available as a consulting/training service. It’s another example of the growing brand hackathon trend.

Sidekick Studios created a series of mobile applications, websites, games and hacks with Comic Relief. The best applications were deployed live for real users to play with.

The prototypes also acted as tests for how Comic Relief could collaborate with advisors and agencies to build things faster and launch more small experiments into the world. Sidekick have built this model into the Sidekick School which provides startup incubation for NGOs and charities.

There are lots of things that you can do to prepare for this new wave of innovation and the changes it will cause in the design, advertising, public relations and consulting industries:

No matter where in the value chain you sit, you can always be faster, leaner and more customer centred. Everyone has a role to play, but the future belongs to the most adaptable and agile.

6 thoughts on “Startup as a service”