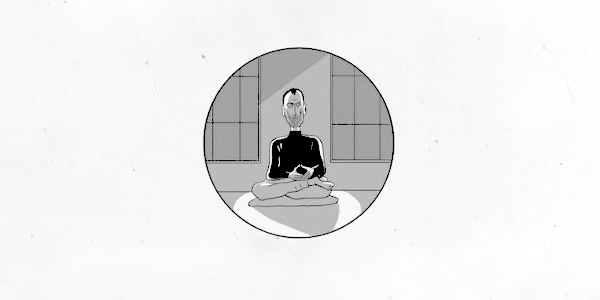 Reading the Steve Jobs Biography has made me realise how important his philosophical views were to his business life. I’ve made a point of keeping my own beliefs to myself, in my work, and on this blog. But Steve’s example is forcing me to confront the fact that the general attitude you bring to life really does inform the attitude that you bring to business.

Recently, several bloggers that I respect such as Olivier Blanchard and Seth Godin have been sharing more about how their personal beliefs inform their work. In this sprit, I’d like to share my own brief explorations with Zen and some practical things that I’ve learnt.

Bring yourself to your work

It can be a real challenge to bring more of your personality to work. Especially when it comes to beliefs, ideas and philosophy. HR and sales training have traditionally been safe places to start a conversation about ‘Why are we in business?’ and ‘What do we want to achieve?’ but they are not enough. To bring more of your own beliefs about people, life and the universe into your work try the following:

The Zen of Steve Jobs

Steve Jobs was influenced by Zen teachers Shunryu Suzuki and Kobun Chino Otogawa. There are some really interesting critiques of Steve’s evolving interest in Zen during his career. There is even a comic book about Steve’s relationship with Kobun Chino Otogawa called The Zen of Steve Jobs. Steve bought Zen practise into his business and the confident minimalism of zen is obvious in the best of Apple’s products. Shunryu Suzuki was one of the first Zen masters to eschew the sudden flash of enlightenment in favour of pursuing every-day incremental improvements. Steve adopted one of Suzuki’s phrases for the early Macintosh team; “The journey is the reward.” This seems kind of obvious, but it’s hard to keep it in mind when you are washing dishes or stuck in traffic.

Using the Landmark Forum in business

I’ve always been interested in psychology and human behaviour. As a teenager, I came across The Monk who Sold his Ferrari and Zen and the Art of Motorcycle Maintenance but couldn’t really get Zen to work for me (on a day-to-day basis). I largely forgot about Zen until a friend suggested that I do the Landmark Forum in 2010.

I did the Landmark Forum in late 2010. The weekend course prompted me to take action on a range of things that I’d been putting off including photography, the move to London and even my relationship with my family.

The Forum is a weekend training course run in the UK, USA, New Zealand and Australia (amongst others). Graduates include the author of Fight Club, the directors of The Matrix, the creator of Chicken Soup for the Soul, Jack Canfield and the actor Neil Patrick Harris from How I met your mother. When I took the Forum in 2010, around one and a half million people had done the course.

My review of the Landmark Forum

I have a tendency to analyse everything. This was a bit of a blindspot for me because I did it all the time (without noticing). I was even trying to do the same thing with Zen. What’s interesting about the Forum is that it is “experiential learning” – which means that the ups and downs of the weekend (like the long hours) are actually part of the teaching process. In the end, I realised that I was analysing almost all my experiences not being in the moment. Once I realised that, I learned that I could choose how I wanted to approach a situation. – Powerful stuff.

Landmark tweaks the normal format of Zen training by having a large group, for a long period of time, in a big room, with a presenter at the front. The result is that you get a more intense exposure to the content. It’s not everyone’s cup of tea, but I’m really pleased that I did it. It’s pretty much the most intense self-help course in existence, everything else is a watered-down version of this.

History of the Landmark Forum

Landmark was grounded in the EST Seminars, created by Werner Erhard. Like Steve Jobs, Erhard was heavily influenced by Zen teacher Shunryu Suzuki and the British Zen scholar Alan Watts. Erhard was also influenced by Dale Carnegie and Napoleon Hill.

EST was created in the 1970s and about 500,000 people took the training including Cher, Peter Gabriel, John Denver, Dr Phil, Douglas Engelbart (who invented the computer mouse) and Arianna Huffington (founder of the Huffington Post). It took Zen and added a dose of “ruthless compassion“. Meaning that the trainer was pretty tough on people (when needed). Like a football coach who has the occasional bout of shouting at the players.

EST and the Landmark Forum are the most powerful ways that I’ve discovered to get an intense dose of Zen for the modern mind.

Finding your own guru

Recently I’ve been experimenting with how to keep all of this alive in day-to-day practice. I’ve come across a much older Zen thinker that provides really good food for thought. Jiddu Krishnamuti is the real thing. An Indian guru who quit being a guru saying to his followers; “Be your own guru.” Recordings of his talks are available online for free. His main point was not to over-think things.

So, how to apply all this in your life? And in business? How can you be zen at work?

3 thoughts on “Being zen at work”