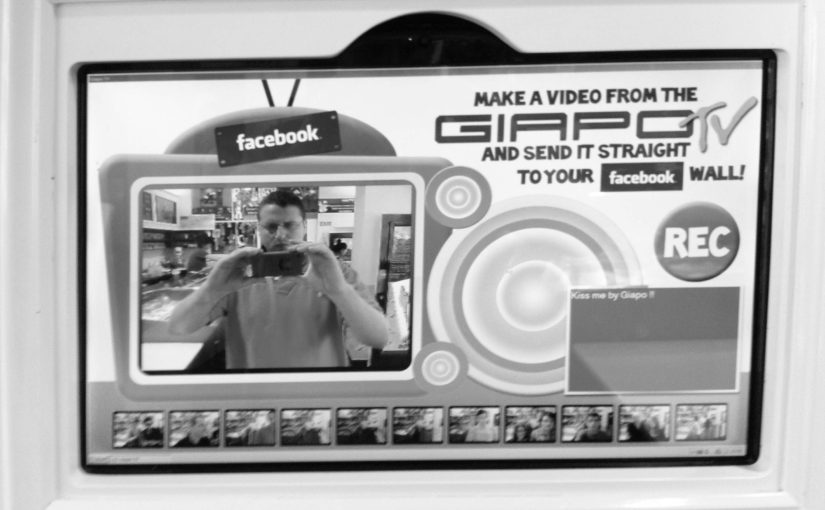 The cutting edge of social media is offline. Businesses have become increasingly lost in cyberspace. They have forgotten that users are still walking around in the real world.

In my consultancy I see a lot of people forgetting the two most important things about social media: 1. Digital experiences can still be part of the real world. 2. Social media doesn’t have to be digital.

Social media is becoming more of a part of everyday experiences in the real world. My favourite examples range from RFID wristbands that let you “like” a ride on Facebook at an amusement park in Israel to touch screen tables that let you order Asian food a restaurant in London. My good friend Giapo Gelato has an HP touchscreen with a webcam that allows you to record a short video instore and upload it to YouTube. For a period in 2010 the Giapo Instore Channel had the most uploaded videos to YouTube of any user account in the world. This was because Giapo had made it so easy to walk up to the screen, press record and instantly be sending a message to the world about your favourite flavour of the day.

The fact is that social media and digital communication were only ever channels for delivering an experience to another human being. It just so happened that the experience was travelling through a screen on your laptop or a phone. In the next 5 to 10 years time, that screen could be anywhere. Improvements in touch interaction, projection screens, and hardened glass mean that you are going to find digital interactions popping up in increasingly unexpected places. While these checkout kiosks, public street maps and projected artworks are an annoyance to an older generation, to Generation Z they will be normal and expected. There is a great YouTube video with the punch line “To a one year old, a magazine is an iPad that is broken.” If you don’t have an experiential and interactive element to your brand, now is the time to start.

Taking the media out of social media

So real life will become more and more digital. But I’m just as frustrated by the online social media gurus who forget that social media isn’t always digital. It’s too easy to forget that your business has always had a community of people around it and that those people have always used content and media to lubricate their interactions.

Five things that you might not think are social media

Cave paintings were used as backdrops and prompts for a village story-teller to recount tales of hunting and village life. Human beings have always used media to promote interactions. At our very core, we crave either individual recognition, or affinity with the group, or both. This deep seated polarity drives our behaviour on Facebook just as much as it drove beat poets in the 1950s in a smoky jazz club or Roman story-tellers in a village square. All creating, sharing and consuming media to bind people together and to mark out the tribe as separate from other groups.

Television has always been a social media, because of the conversations that it prompts. The water-cooler buzz in the office on the day after a big show is just as social as the live tweets about the latest X Factor. The water-cooler conversation is simply a little less efficient and asynchronous because the show is finished before the conversation starts. BBC comedian Stewart Lee has a piece (spotted by Nick Emmel) in which he comments [paraphrasing]: “Television used to be about participating in a massive shared experience, being a part of something. Now you can watch a show alone, downloaded in your own time, and be part of nothing.” Lee is noticing that TV was always a social media, just the channel for the conversation has changed.

The most important business-to-business social media is a Post-it note stuck in a magazine. I’ve lost count of the newspaper clippings left on my desk and the Airline Inflight magazines with a page folded down and a note from my boss saying “New business potential…” Printed material is more social than we realise because it persists, it can be shared and it has a talismanic value when passed from one person to another.

The printed out Dilbert cartoon on the wall of your IT department is a form of social media. Once it’s on the wall, the cartoon becomes a media that reinforces a particular message to the sender and communicates it to an audience. Those naff signs in the accounts department are also social media, you know, the ones that say “I can please one person a day and today is not your day.” They spread via photocopying, they carry an idea and they create a badge of identity. If you are not just as fascinated by those signs and cartoons, as by the latest social media websites, then you are missing out on the human, anthropological and psychological view of social media. My friend Hugh McLeod has built an entire career on turning printed cartoons in the workplace into “Cube Grenades“.

I’ve scribbled all over my copy of Mitch Joel’s Six Pixels of Separation. Whenever I lend my copy out to someone I encourage them to write on it as well. It’s now a bit dog eared, but that book has a life of it’s own as a shared record. It’s a shared social experience on an admittedly very small scale but it’s also a very personal one. Lend one your own favourite books to a friend, discuss it with them over a beer and then come back and tell me that social media is an “online only” trend.

5. Conference or a party

Events are a full of media including the speeches, recordings and slides. Scales range from huge TED conferences to board game nights at your local pub. The more isolated that people become in their day jobs, the more they crave real human interaction after hours. There are great websites that contribute to this trend like meetup.com but there is no media more social than simply being in the room with other people. The media part is the icebreaker provided by the speaker or event theme. If you’ve ever used the line “What did you think of that last speaker?” at a conference then you’ve used a form of media to smooth a social interaction. That’s social media.

Design for the real world

For consumer brands, some of these offline social media need to be more scalable experiences like coupons, touchscreens, friend-get-friend promotions and sponsored events. Whoever your audience is, you can use social behaviour as part of almost any promotion if you think laterally. Next time you’re looking for a big idea in social media… get away from your screen and look outside.

6 thoughts on “Social media in the real world”