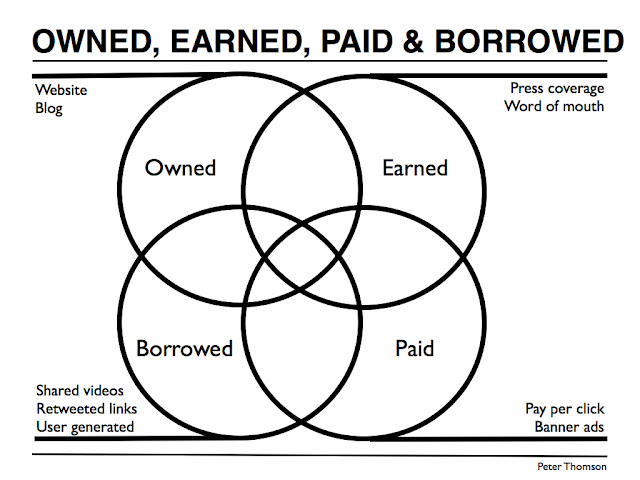 In 2009 Forrester picked up on some discussions in social media circles from people such as David Armano and codified the classification of digital media into owned, earned and paid types of media. This structure makes a classification based on the nature of the media itself rather than the activity that you do on it.

MEC (part of WPP) see the different types of media in a sequence. First you get the message out with paid, then you feed people content in your owned media, then your story gets spread through earned media. Community management firm Temporo have a great blog post summarising the model. Nick Burcher notes that each of the types of media have an “Always On” aspect and a “Campaign” aspect.

It’s a tempting classification because it allows for pretty venn diagrams and it’s simple enough to remember when the deer in the headlights moment happens in front of a client. Sometimes a client starts pummelling you over a coffee with “How do you break down the different areas of social media?” I’ve used it enough times in a tight spot. It’s a dangerous mental model because it perpetuates the problem of perspective. Owned, Earned and Paid only work as a classification from the consultants perspective. From a client’s perspective the challenge isn’t “Where to spend my advertising money?” it’s a business challenge of how to reach an audience and tell a compelling story.

Your apps and micro-sites within Facebook look owned media. But increasingly, they behave like earned media. Soon Facebook will roll out paid advertising “in the stream” and your timeline will look like paid media. More importantly, where does customer service on Twitter fit? Or online focus groups like Starbucks’ MyStarbucks Suggestion Boxes? I have two suggestions to fix the model. The first is to abandon it and base your background classifications instead on who the audience is and what you want them to do.

What do you want me to do?

You can classify activities and media by the ways that you want people to interact with it. There is an emerging trend that “The marketing is the experience.” So instead of watching an advertisement, people want to experience and engage with your brand in an interactive way. But not everyone wants the full experience.

I’ve been using the 1%, 10% and 100% classification a lot recently. Google’s researchers have found that on a YouTube video:

The power of this classification is that it forces you to think through the different ways people will engage with your campaign or idea.

The rule is also sometimes called the 1% rule and the 1 9 90 rule. But the underlaying message is the same for your social media expectations and campaigns. Take a car promotion for example: Who are the 1% that are going to enter BMW’s competition by creating their own video? How can the 10% still engage with the competition? What hidden brand messages do the promotional material for the competition convey that still resonate with the 100%? The 1-10-100 model isn’t entirely irreconcilable with Paid Owned Earned because each media could be a better fit for each of the audience groups. Paid media reaches the 100%, the 10% are your customers who see your owned media and the 1% of fans will give you your earned media.

If you are not quite ready to abandon the Owned, Earned, Paid split then you can rescue it by adding Borrowed Media to the circles. You literally don’t own your Facebook page, it’s still owned by Facebook. You don’t Earn your Facebook page. You earn the Facebook mentions of your page by your fans but the page itself exists whether you Earn the buzz around it (or not). Lee Odden would like to think that it’s also called “Shared Media”. Not a bad term, but it confuses the fact that sharing can occur across all of the channels. Your Facebook page is Borrowed Media. As are the Flickr photos of your product by fans that you’ve curated into a gallery. The viral YouTube videos that you are Tweeting about are borrowed. Borrowed media adds a fourth category to paid, owned and earned media. Ad agencies, design firms and PR firms would all like to contribute to your strategy for owned, earned and paid media. Creative advertising agencies (and their media agency bedfellows) are the masters of paid media. The PR firms know how to get you Earned coverage with influencers such as journalists, bloggers and analysts. The design firms can make your owned media website and micro sites sparkle. But who will build conversations on borrowed media? The new breed of specialist social media agencies like We Are Social would love to be the total answer to the question of borrowed media. But ultimately the answer is you, the client. You are going to need to respond to the customer service tweets yourself. Only your internal R&D team care what videos your community are watching. Only your internal marketing team know whether it’s really ok to retweet your competitors cool new whitepaper because every one of your customers are also tweeting about it.

McKinsey had a run at adding Hijacked and Sold media as extra channels, but both of these are reactive not proactive so don’t probably add much planning value to the model. The real test for a model of media is whether it helps you make decisions and create a better strategy.

You can use the 1-10-100 model even if you continue to talk about Paid Owned and Earned. Just keep in mind that the fun is happening in the overlap between channels. To your audience, every type of media is just an invisible part of their overall impression of your brand.

One thought on “Owned, earned and paid media”